On August 1, 2021, on this exciting and special day, Shenzhen Lianrui Electronics Co., Ltd. held the housewarming ceremony of its R&D center. This is of epoch-making significance for Shenzhen Lianrui, and is also the witness of enterprise development milestone.

With the large-scale rise of global 5G communication and the rapid development of the era of big data, the pressure of data centers is doubling day by day. More bandwidth, lower delay, more capacity expansion equipment, more compact internal space and so on make the global data center machine room become crowded. So how to increase the capacity of more equipment in the existing space, as well as achieve higher bandwidth has become the primary issue of the global bidding reform of the major manufacturers.

Since 2011, both the Facebook-led OCP NIC project and China's Open Data Center Commission (ODCC) have been working to promote the opening of data centers. OCP network card is gradually becoming the first choice for data center to solve the problem of compact space and faster delivery of the whole computer room cabinet in the future. And many OCP network cards launched by LR-Link Link have been widely used in many server manufacturers around the world.

OCP 3.0 network card is very popular in the industry, the first reason is that the card adopts SFF small size specification, small and thin, more suitable for high-density space requirements. The second sandwich design, the user can be inserted into the server chassis from the panel through the handle bar or screws, to achieve the cabinet does not open the cover maintenance, flexibility is stronger. On top of that, the OCP program is responsible for the rapid growth of OFS, which have become an important part of the data center of the future because of their high density, fast delivery, easy maintenance, and high return on investment.

LR-Link's industry's first dual-port 25G OCP 3.0 network card (based on Intel chip) is designed for high-capacity converged network applications, capable of achieving dual-port, duplex throughput and high-speed transmission rates, and is an understanding solution deployed in data centers and high-end devices. It will play a significant role in promoting the market application of different forms of multi-node servers which mainly focus on the delivery of the whole cabinet. 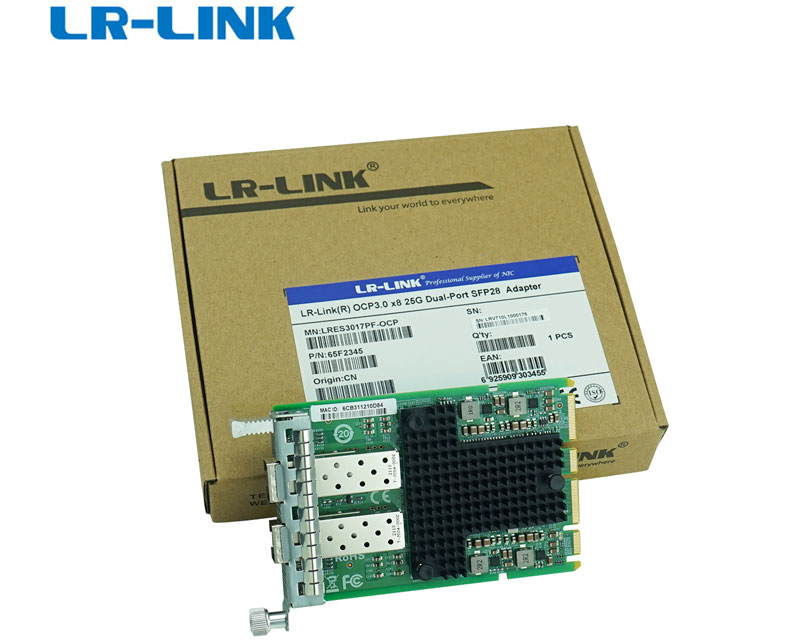 On product performance, the double light mouth 25 g OCP 3.0 nics can through multiple ports bundled together in groups at the same time, realize the fault tolerance and redundancy to ensure network performance and extend the network bandwidth, can real-time to detection and implement communication route from fault port to other members in the group continues to run, in order to realize the continuous high performance communication. With SR-IOV, ISICI, FCOE and network virtualization functions, support IPv4 and IPv6, compatible with more than 98% of the mainstream operating systems in the market, is to adapt to the current and long-term future of the new and old server market on the network traffic and data distribution, processing, virtualization and big data operation requirements.